Normally, a man needs an excuse to visit a zoo – perhaps in the form of a child needing a chaperone. Or maybe a simpering girl, treating you to a glimpse of her petticoats and whooping at the cute little penguins. Of course, it might simply be a judgement muddied by drink.

What’s my excuse? A small mulled wine and a quote from Crazy Sandra. My suggestion that she grow her hair and ditch contact lenses in favour of glasses – for seduction reasons  – occasioned a scowl that could have blistered the family portraits. ‘I’m not sexy, I’m not a secretary, I’m just a pig,’ she said, her voice as far from gentle and fluting as a voice can physiologically be.

Welcoming this rare insight into the female pysche, and still wrestling with this gnomic remark, I took her at her word and we oinked off to visit her brothers and sisters at Schonbrunn – “the world’s greatest zoo”. Opened in 1752, it is also allegedly the world’s oldest. 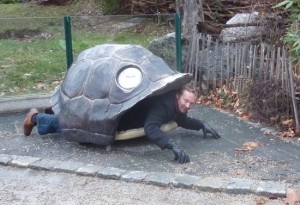 Shall I tell you a little animal story? OK, then. Once upon a time, I rode in a jeep through Tanzania’s Serengeti, a vast savannah teeming with exotic wildlife. Well, I say exotic, but that depends largely on one’s point of view.

A Masai warrior, for example, up to his spear tip in the Big Five, might very well regard the common squirrel as the cat’s pyjamas. Similarly, a parched, desert-dwelling Berber might go equally gooey at the prospect of the much-vaunted English duck. See what I mean?

Back to the jeep. The first morning supplied a convoy of Thompson gazelles, zebras, gnus and suchlike. Pretty incredible? Certainly, yet man can take only so many wildebeest before incipient monotony rears its mottled tail. ‘Give me a shout when you see a lion,’ I said dismissively after a couple of hours, and hunkered down with a Clive Cussler for a while.

I’ve felt guilty about that ever since. But I experienced much the same at Vienna Zoo, even though accompanied by a jolly, porcine chum. So cold that even the penguins had headed inside for an hour by the radiator, we soon followed suit. And what did we find inside?

The sloth. What an extraordinary animal, blinking on what seems like a weekly basis. Hardly a world-beater when it comes to top ten animals in the polls, yet – oddly – I’m enthralled. For a start, there is no glass or safety cordon here; bizarrely, not even a security camera as far as I could see. How refreshing in a continent of Health and Safety.

There was nothing, in fact, short of razor-sharp teeth, to stop me reaching up twelve inches and challenging both lurking sloths to arm wrestles. Moreover – and this is the worrying bit – there is nothing to stop an imbecile, with less common sense than I, from experimenting in a sloth’s ear canal with a pencil.

Contemplatively, I watched these two marvels crossing a rope – at the speed of continental drift – until closing time. And then it was feeding time – Piggy needed her dinner..