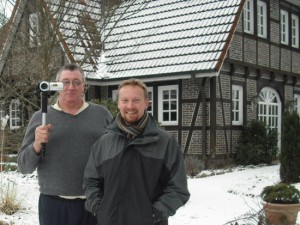 Now, remember that we sleep in trucks on the Tina Turner Tour? Right, well today we are not parked as cosily as normal – our lorries are parked approximately one hundred yards apart. If you live in Europe, and are happy to approximate distances, a yard is three feet. That didn’t help, did it? OK, well, a yard is pretty similar to a metre.

My mobile phone beeps, indicating an incoming text message from Namibian. It says: ‘flask ov tea is made wen u wake.’

Good heavens, has the advent of the cellular telephone led to the destruction of the English language, I wonder, with a tinge of melancholy? It has certainly led to a breakdown in communication.

Now, you will be pleased to know that this was how Namibian spelled words to start with, and so texting has made little or no difference in his case. I grasp his gist – that my pink thermos is steaming and awaiting collection from his cab – and make a dash through the snow.

He really is a lovely man, looking after me faithfully. The other eighteen truckers can make their own blasted tea as far as we’re concerned.

Oh, I’d better introduce Frank. And quickly. That picture in the last blog, of me holding a cat the size of a puma? That was at Frank’s place. So, now that we know who Frank is, he can arrive again – in a wonderfully-dented blue van, its ashtray bursting at the seams.

Once more, he has driven across the city of Hamburg to collect us, bringing us back to his paradisaical abode north of Hamburg.

Namibian has realised that he must shuffle around Frank’s house, feet splayed, to avoid stepping on mainecoon cats. We agree that, him weighing around 128kg, a misplaced sock could easily pulverize one of these €700 animals. The house is congested with them. Cats, not Namibians.

Frank’s wife, the smiley Miriam, maintains that we are welcome to stay, providing we can remember the names of all six mainecoons. Well, that was what she jokily demanded last year, which led to a jolly little game on tour with Frank.

For six weeks last summer touring with Lou Reed – remember “Walk on the Wild Side”?  – Frank allowed me three guesses per day until I had come up with all six names.

In the end, he had to tell me the genders and the first letter of each animal – which narrowed things down considerably. Even so, these are cat names we’re talking about: think Indigo rather than a more obvious guess of Imogen.

Now, just in case Miriam was to interrogate me on arrival, I had written the names down, taking the precaution of bringing the piece of paper with me. But I’m not sure why I mentioned all that now..