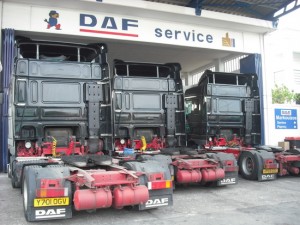 Finding a football stadium without a map is reasonably simple. A DAF garage on Thrakis Street, Patras, however, is quite another matter. Spaznavs and Autoroute 2007 are next to useless down here; one has to use “the force” instead. Or buy a map.

Aha, but although a map is a sensible, well-founded notion in, say London or Berlin, this is Greece – and they use funny letters to confound us. A Patras map does exist – with streets thoughtfully marked in the Roman alphabet…but the index is in Greek. We’re stumped. Patras is hardly a small hamlet of half a dozen avenues.

The solution then, is for Little Dick to scout ahead, paying a taxi driver to lead the way, and to call me with garbled directions. Voila, Namibian and I arrive with a minimum of fuss. 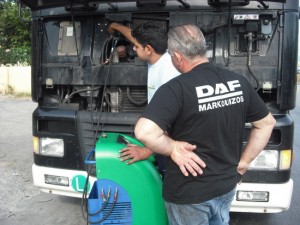 e Mediterranean now – and we’re in a hurry. We’ve a boat to catch. Immediately grasping the need for haste, the mechanics make coffee and we all sit down for a little chat before fixing those nasty, dirty lorries.

Two technicians – the colour of spanked walnuts, if such things existed – squabble obstreperously both during and after our coffee break. The shorter of the two is wearing a white apron, looking a little like an ice-cream vendor.

They size each other up – it doesn’t take long because even drawn up to their full height, and shod in heels, neither of them reaches my chin. Gimlet-eyed, with deeply tanned brows, they continue to bicker and I wonder if there’s any chance somebody might run a retina over my truck this side of lunch. I’m not here on a social call. 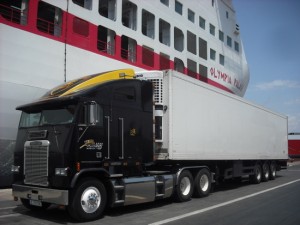 Finally we’re away, filling up with cheap diesel and weaving an unconventional route to Patras docks. Organ donors (motorcyclists without helmets) buzz around us, yet another nuisance as we follow a tortuous route to the ferry.
The port, when we finally reach it, is pandemonium. What a frightful system they have in place here for booking onto a boat.

Perhaps it would be simpler if we were boarding a domestic ferry over to one of the Greek islands. But no, we’re long-distance, rock and roll sort of chaps. It’s the twenty-one hour journey to Italy for us, if you please. And check-in is simply dripping with inconvenience.

We drive into the port and park. Even this bit isn’t blindingly obvious; an awful lot of ships seem to be knocking about here – or moored, I suppose one should say. But the nice thing about bumbling along near the back of the fleet is that there are generally at least a dozen black trucks to look out for. Aha, there they are. Over there, Namibian – I’ve found our colleagues, look. 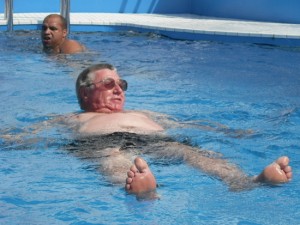 Now we have to walk about a mile – it is only a hundred yards as the crow flies – to the booking office, shadowing interminable wire fences. Namibian is peeved to say the least – this is some serious walking in his book, and the word ‘taxi’ is being bandied about for the return journey.

When we return, we’re advised to check underneath and inside our trailers, and on the roofs of our trucks. This is a port renowned for lurking Albanians, hitching routinely and clandestinely. Vigilantly, Namibian takes a look round my truck for me – Wrecker Jon and I are in the middle of rather an important chat about the rigours of one of our Russian adventures in 2001. I’m busy.

Ah, travelling to Italy by sea: heavenly. AC/DC tour truckers lounge on the top deck, admiring Namibian’s backstroke technique in the swimming pool. ‘Tsunami,’ we chorus as he bellyflops into the water. Puerile of course, but it amuses us nonetheless.

In fact, I’m still chuckling as I type. But onto a serious note: lounging with beers and a topless Namibian, we make plans for a 7pm dinner. Yet nobody seems to know whether the ship is on Greek time or Italian.

To compound the confusion, some drivers’ wristwatches are still on British time, and Jon and I are still bemoaning our jetlag from the forty-minute flight yesterday. And as we dock temporarily in Igoumenitsa on Greece’s west coast, I receive two startling text messages: ‘Welcome to Albania’ and ‘Welcome to Iceland’. What on earth is going on?..