‘The portion is very big,’ says the affable German waiter. Nick gives a breathy, approving response, then champs at the bit while the waiter scurries off. When the colossal dish finally arrives, his eyes goggle, aflame with gluttony, as though a troublesome brassiere clasp has finally broken free to reveal unfettered splendour. ‘Diet starts tomorrow,’ he lies, and he plunges in unreservedly.

So what are we doing in Hamburg, you ask? Well, two drivers have returned from bumbling up to Oslo in my truck for a Taylor Swift show up at the Spektrum. And now they’re back again. It seems I have time for a sociable snifter – mulled wine with Amaretto – before toddling down to Oberhausen for Taylor’s next concert. Oh dear, as though I didn’t have enough to drink in the Cotton Club last night.

Sneaky Cigarette in the Restaurant

‘Roll me a fag, would you Kev,’ says Surfer Steve, an 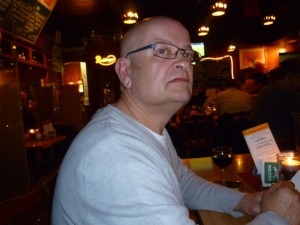 other double driver, from across the table. ‘Is it Golden Virginia tobacco?’ Nick is up to his larynx at this point – gorging himself and beginning to look worryingly pregnant – and can barely voice an objection to smoking at the dinner table. (Germany seems to be overtly flouting the smoking ban in this particular restaurant.)

Kev passes Steve a pre-rolled cigarette from his little gay case. ‘Amber Leaf with a charcoal filter,’ he boasts. ‘My missus rolls them with her thighs.’ Steve recoils momentarily, yet exercises laudable self-restraint and talks wildly of rounding off the evening with a hot chocolate. He’s caffeine-free, you see, and jolly proud of it, too.

‘Caffeine-free is definitely the way to go,’ says Kev, bald as a coot and squinting through his spectacles. ‘I’ve drunk Redbush tea for ten years now and look at me.’ Hmm, I’m not sure he’s even jok 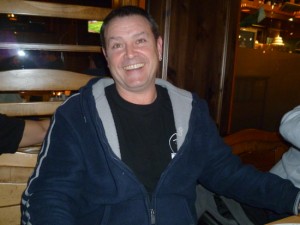 ing; he looks expectantly at us. Nick simply basks in a blissful afterglow, a man sated and ready to turn out his bedside light.

Cockney Russ, a man with the voice of a Billericay bulldozer, suddenly puts down his fork and delivers the killer quote of the evening: ‘The only red bush I’m interested in is attached to a six-foot ginger bird.’

You know, I’ve almost missed these chaps over the winter. Almost..